The scheduled Transnational Training Event, in the framework of the European Erasmus+ project RoboGirls, took place in Athens, Greece, from Monday 16th to Friday 20th May, 2022.

The purpose of the training was to create a transnational community of like-minded education professionals, who will support each other in the future and will be able to implement training activities in their countries, promoting gender equality and adopting innovative actions in education through the use of digital technologies, with the aim of maximizing the positive attitude of students, and especially girls, towards digital technologies.

On the first day of the activity, the participants visited the 26th and 29th Primary Schools of Acharnes, housed in the same building. They were welcomed by the Headteachers, Mr Athanasios Pertsinidis and Mr Dimitrios Kalampalikis, respectively. A student reception committee with their teacher and participant in the training, Nikolitsa Nifora, told us about their experience from the pilot implementation of the project material in their schools, in a wonderful classroom full of colors, books, and STEM projects of the students.

In addition to the trainees / trainers, the Director of the Regional Directorate of Primary and Secondary Education of Attica (RDPSEA) and project manager, Mr Georgios Kosyvas, was present, as well as the Educational Coordinators and members of the RoboGirls project team, Ms Christina Papazisi, Ms Paraskevi Foti and Mr Matthaios Patrinopoulos, Mr Vassilios Charitos, Educational Coordinator of the 5th PEKES, and the members of the pedagogical team, Ms Maria Katopodi and Mr Vassilios Proxenias.

The event was saluted by the Director of Primary Education of Eastern Attica Mr Dimitrios Nikoletsopoulos.

Ms Katopodi introduced the trainers/trainees and the organizations they represented, as well as everyone else present.

Mr Kosyvas welcomed the trainers/trainees, made a brief presentation of the RoboGirls project, and thanked those who contributed throughout the project. Ms Ana Sović Kržić observed that the presentation she had prepared for RoboGirls was largely covered by Mr. Georgios Kosyvas, so Mr Kosyvas continued his presentation with the topic "Connecting the RoboGirls project with the skills workshops in Greece". Mr Kosyvas referred to transversal interdisciplinarity, computational thinking, authentic problem-solving, which connects education with everyday life, the steps to be followed in the modern educational process and the cultivation of 21st century skills, elements that connect the RoboGirls project with the ‘Skills Workshops’ programme that has been recently implemented. 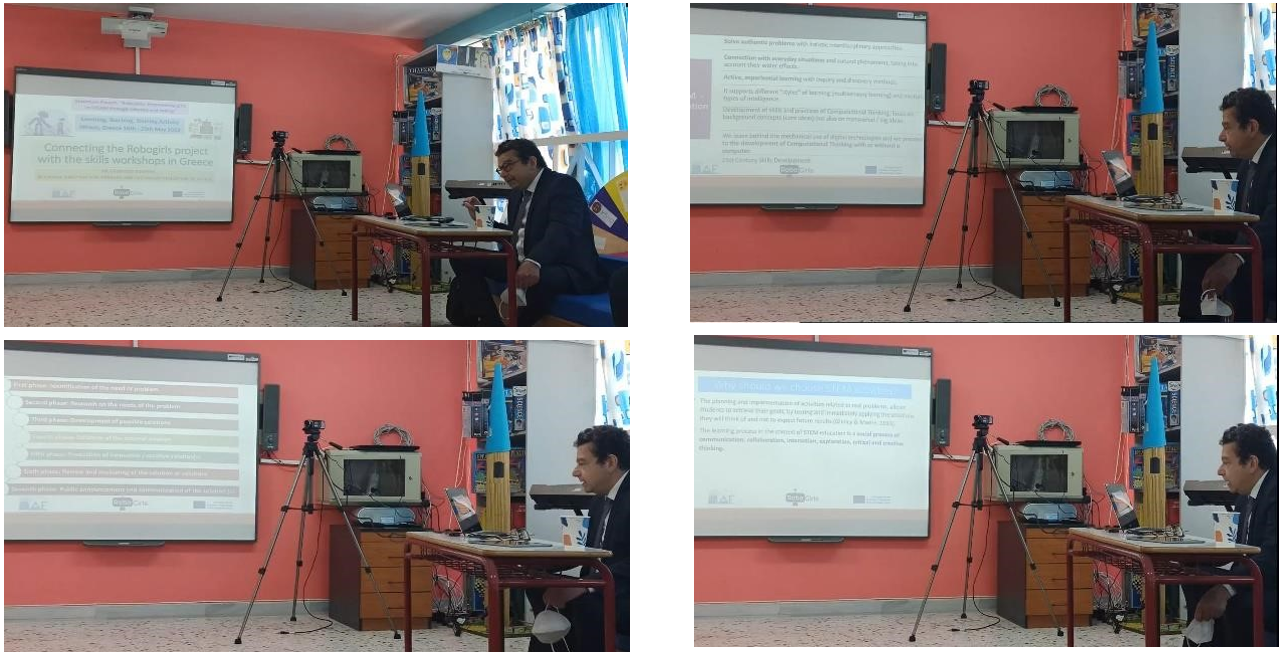 In the next phase of the presentation, Educational Coordinators Ms Papazisi and Ms Foti played a “Getting to know each other” game with the participants, who introduced themselves to each other and shared professional information and concerns, as well as their expectations from the training event.

This was followed by a visit to the classrooms guided by the headteachers, where Primary school teachers and students who had participated in the pilot implementation of the pedagogical material during the months of December 2021 to February 2022 presented their creations and offered gifts to the trainees. 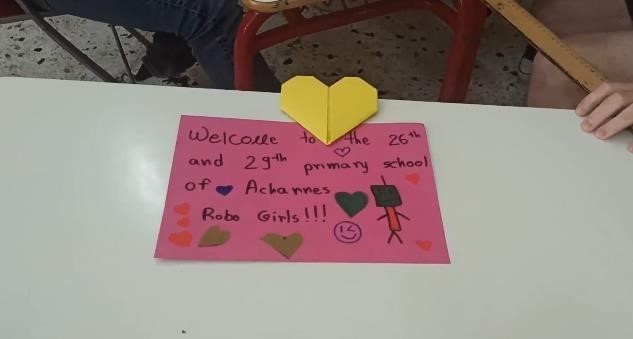 After a short coffee break, the workshop on "Unplugged STEM" by RDPSEA began. It took place in the conference hall of the two schools, decorated with children's paintings and paper planets hanging from the ceiling. 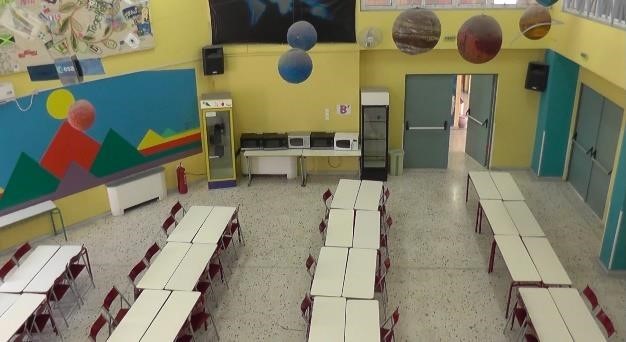 Educational Coordinator Mr Matthaios Patrinopoulos highlighted the necessary conditions for the implementation of unplugged STEM activities and presented the activity-challenge that the trainees had to face: the construction of a bridge of specific dimensions and capacity, using cardboard, rulers, scissors, scotch tape and BeeBots.

5 teams were formed, two made up of the trainers/trainees, two of students and a teacher, Ms Nikolitsa Nifora and Mr Evangelos Lytsioulis respectively, and one team of students only. The reasoning followed by the groups and the emotions shared were: first reflection, then product designing, construction of the product, trial-error with subsequent corrective moves, and finally enthusiasm and satisfaction for achieving their goal.

This was followed by a light meal in the same place, exchange of views and reflection on the previous workshop. Ms Nifora offered the participants miniature bottles of liqueur on behalf of the parent association. 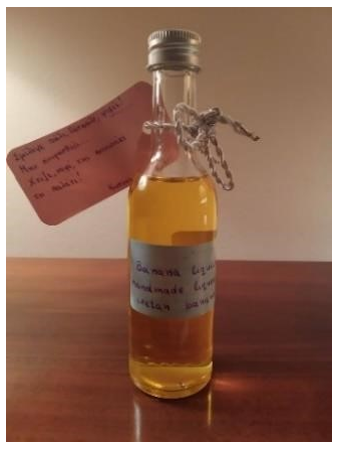 The venue for the second day of the learning-teaching-training activity was Model High School of Agioi Anargyroi. The trainers / trainees were welcomed in the conference hall by the Deputy Headteacher of the High School, Mr Panteleimon Chionidis, who presented a RoboGirls team with their teacher and participant in the event, Mr Evangelos Lytsioulis. The girls shared their experience from RoboGirls STEAM activities and their dreams for a career in STEM. Mr Lytsioulis added his positive experience from the pilot implementation.

Ms Isabel Alvarez Testillano, representing UAM, Spain, started with a very interesting and lively presentation on "Modern pedagogies for gender equality". Using the popular kahoot and padlet applications, participants responded to quizes on the subject. Ms Alvarez Testillano explained the distinction between sex and gender and how strong stereotypes remain in many societies, where the male gender still prevails. She added that school, as a key factor in students’ socialization, has the social duty to pursue peace and gender equality and to promote values and standards neutral to gender, through spoken language, attitudes, games and educational material that does not reinforce stereotypes. Some suggestions to achieve this at central level were: compliance with the principle of equality between men and women in the school curriculum, elimination and rejection of sexist behaviors at school, integration of these principles into teachers' introductory training, promotion of the balanced presence of men and women in school administration, showcasing of female role models, etc.

At the end of this first presentation, the Headteacher of the school, Mr Christos Mouratidis, gave a short welcome speech to the participants. 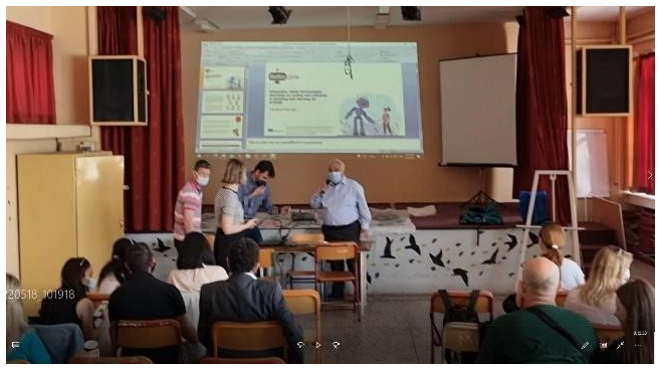 Ms Laura Hyland and Mr Patrick Conlon from The Rural Hub, Ireland, followed with their presentation on the subject of "Integrating digital technologies (focusing on coding and robotics) in teaching and learning for STEAM". Given that by 2030 STEAM skills will be required in 70% of occupations, the need to integrate robotics and programming into education, while developing computational thinking, innovation and problem-solving skills, is urgent. The Irish Digital Education Framework 2015-2020 focused on the development of teachers' digital skills so that they in turn can support the development of digital skills in their students, by introducing them to technology, which will be an important part of life in the future. Introducing programming and robotics through STEAM education from early childhood is vital. The use of the Lego Education Kit, Arduino Circuit Board, Raspberry Pi, Sphero, Snap Circuits is recommended for beginners, as they are fun, well-designed and economical kits. Inquiry, student-centred learning, trial and error, the development of collaboration, communication, critical and creative thinking, etc. are encouraged. Furthermore, the two teachers presented the "STEM 2017-2026 Education Policy Statement" by the former Irish Minister for Education and Skills, Richard Bruton T.D., which aims to inspire more young people, particularly women, to specialize in Science, Technology, Engineering and Mathematics, and draws up a roadmap by 2026 with the aim of making Ireland the best education and training service in Europe.

After completion of the presentations, coffee was served and RoboGirls souvenirs were offered by the RDPSEA to the trainers-trainees. 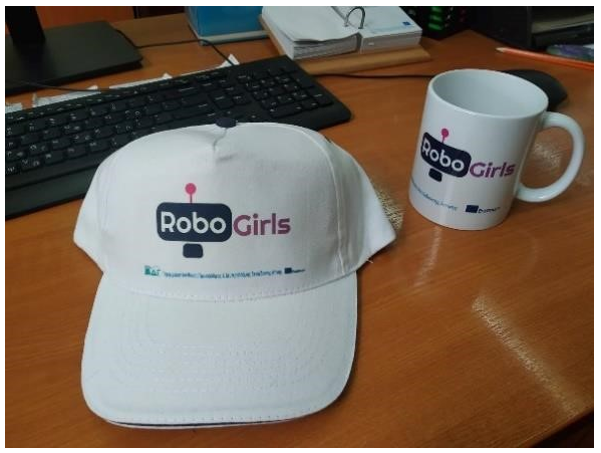 The participants then went to the computer lab to do the "Educational robotics, coding tools for school education" workshop, under the responsibility of UNIZG, Croatia. The trainees were divided into two groups, one for robotics, with the Lego Spike Prime kit, and one for programming, with Arduino. Ms Ana Sović Kržić and Ms Dalia Kager guided and supervised the process with the help of Mr Evangelos Lytsioulis, the teacher responsible for the lab. It was a very interesting and fun learning process, to be applied by the trained teachers in their classes so as to promote STEAM education. 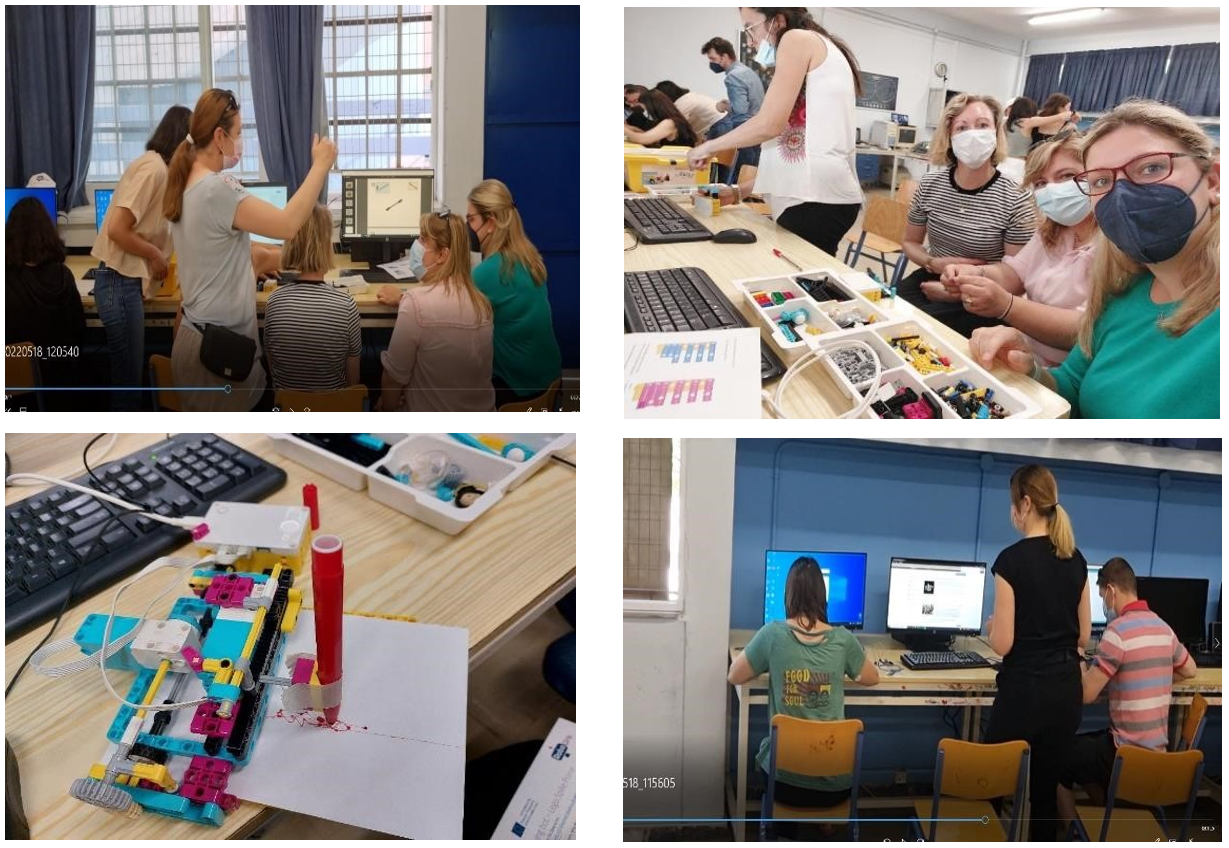 A light lunch was offered right after.

On the third day of the activities, the team visited Rallia Experimental Primary Schools of Piraeus. The trainers-trainees were welcomed by the Headteacher, Mr Vassilios Panopoulos, and the Deputy HeadTeacher and member of the RoboGirls Comittee, Ms Maria Rellia, in the conference hall.

The presentation of "Introduction to the RoboGirls Toolkit and OERs", by CARDET / Innovade, was made by Ms Nicoletta Pantela. Ms Pantela made an overview of the e-learning platform robogirls.eu/el/e-learning , presenting its basic components: A Comprehensive Guide for Teachers, Lesson Plans, Experiential Workshops, Thematic School Days, a Career Choice Simulator. Piloting of the above material was implemented the previous winter to more than 800 students by more than 40 teachers in the 5 partner countries. The feedback obtained from students and teachers was presented, as well as suggestions for improvement. 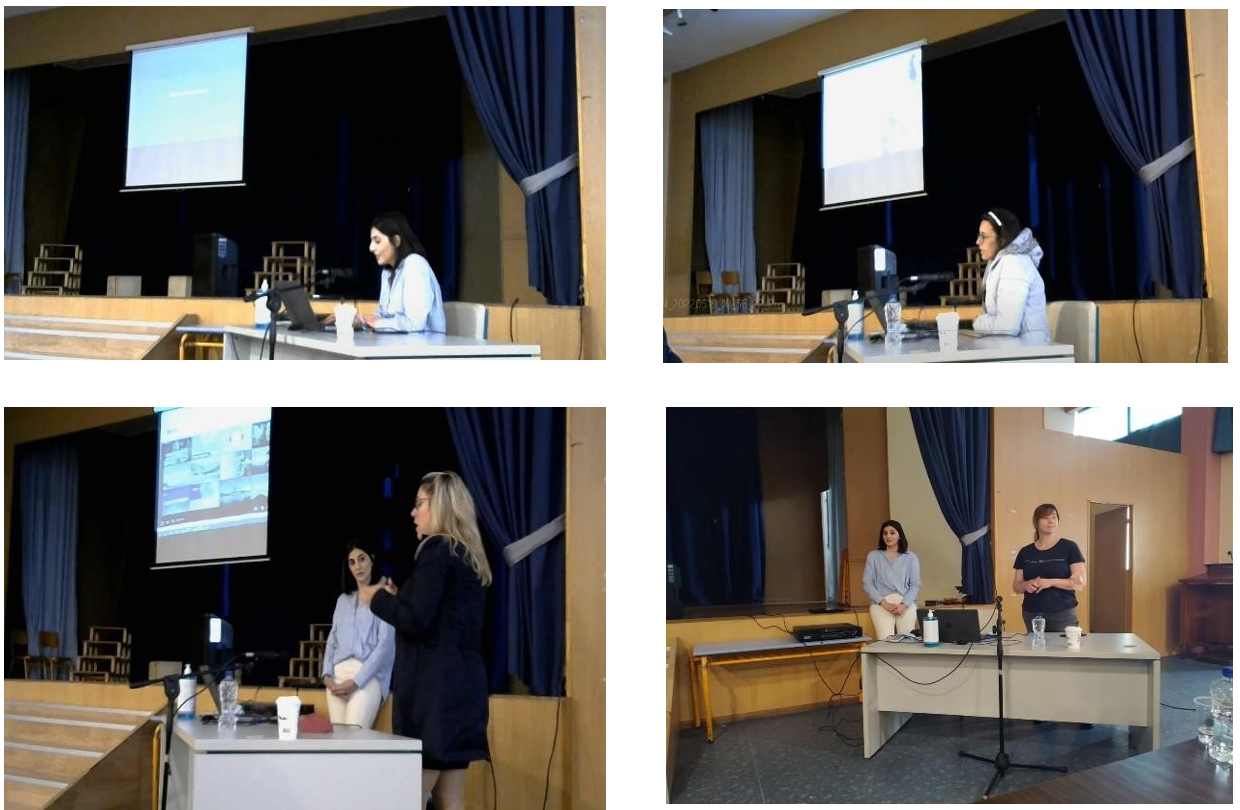 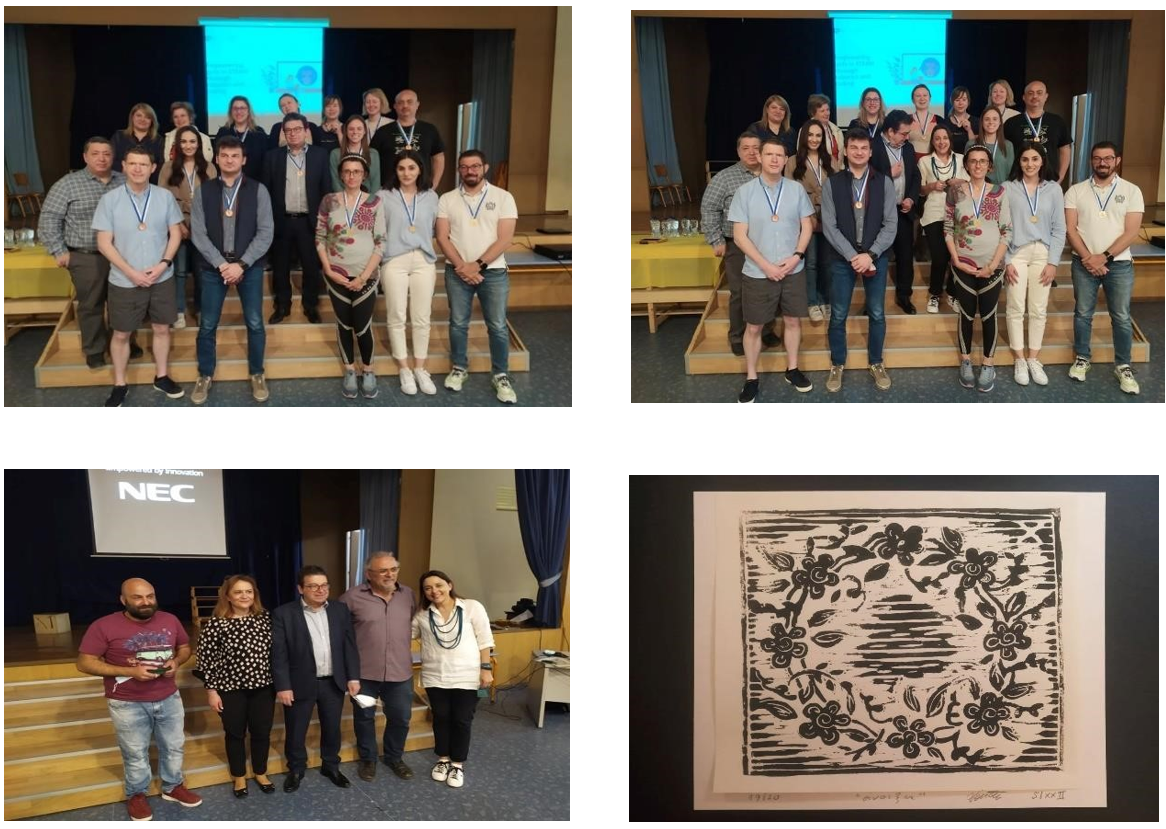 Next came the “E-learning platform” workshop, by CARDET / Innovade, Cyprus, conducted by Ms Nicoletta Pantela, during which the trainees were divided into teams and asked to select a lesson plan or workshop, in order to suggest improvements. SWOT analysis followed in the jamboard application. Finally, there was a short presentation of the RoboGirls MOOC, which will be available from August 2022 on the RoboGirls website and will consist of the following 5 sections for asynchronous training with a certificate of completion: Modern pedagogy for gender equality, Basic principles of the STEAM approach, The use of robotics and programming for STEAM teaching, Designing a STEAM course, STEAM assessment. 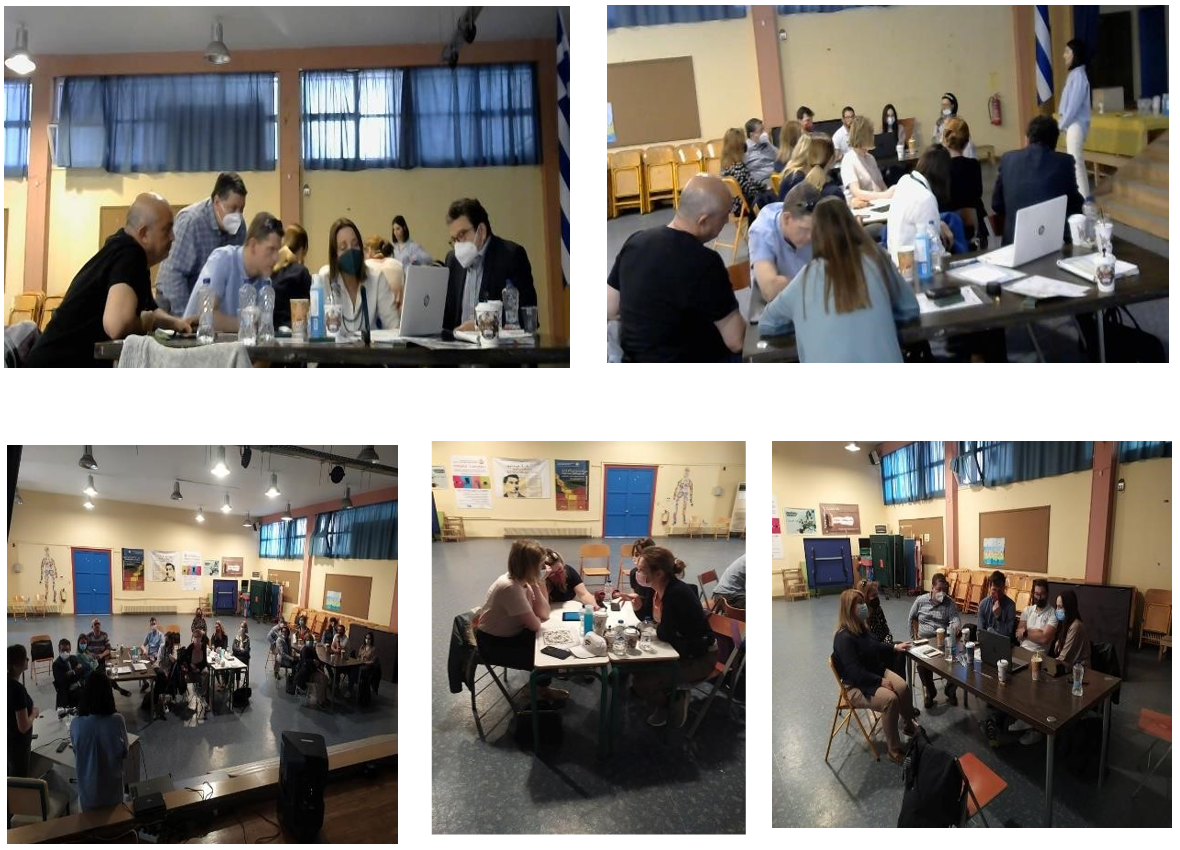 In celebration of the successful completion of the LTT activities, the host organization, RDPSEA, hosted a lunch meeting, in Mikrolimano, Piraeus.